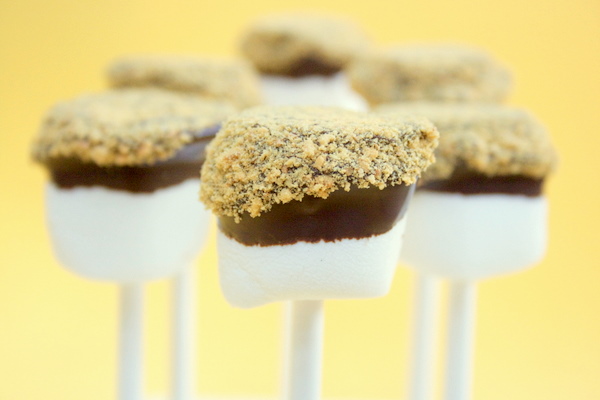 Never ever have I made anything that is as simple – or adorable – as these S’mores Pops. For reals. All I used is some marshies, some melted chocolate, some graham cracker crumbs and lollie sticks. Honestly, that’s all you need and you’ll be S’more-ing it up in no time. Stick these bad boys over a good ole’ campfire, let the marshie get a bit toasted and voila! A reinvented childhood fave; now how cool is that.
To make prettier S’mores Pops that would look best in photos, I hand-dipped the marshies in melted chocolate which prevented me from coating the entire marshmallow. But you could roll the whole marshie in chocolate for a better chocolate-to-marshmallow ratio which I think I would have preferred anyways (careful if you dip the marshmallow in the chocolate once you’ve inserted a lollie stick. The weight of the chocolate pulling on the marshmallow can pull it right off). The sticks I got where from the baking section at Michaels.
I then rolled the chocolate-covered marshmallows in graham crumbs before letting them harden for 5-10 minutes in the fridge. My chocolate was pretty thick (I even added a tablespoon of veggie oil) so the fridge step really helped out. Stick em on their sticks after the chocolate has firmed up and serve right away. (I took at least 60 really great photos of these pops except the shade of yellow was so different in each photo that it looked really off when I posted them. Please don’t mind the lack of visuals!)
And if you’re not a huge S’mores fan but still like the ease and simplicity of the dessert-on-a-stick idea, you could always go for a little colour. And some Jimmies. And make some Jimmies Pops. Not the tastiest things ever (Jimmies are so tasteless!) but how could you resist the cuteness? 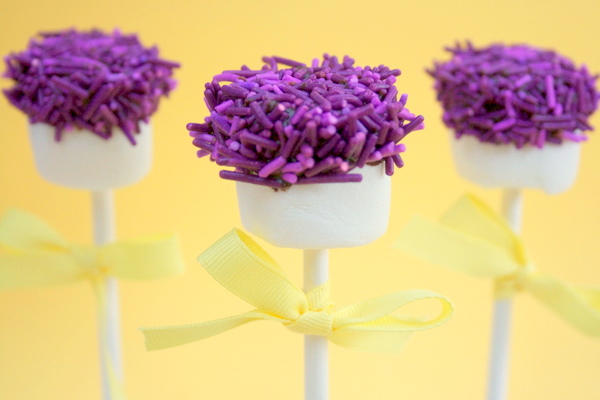 Wrap in some cello plastic and tie on some adorable bows for cute and cheap party favours. Or stick in a fabric covered Styrofoam chunk for a cute addition to any candy or dessert buffet at your next event. I love these things because they are so versatile too. Try white chocolate with crushed up chocolate bars in place of the graham crackers. Or coat the entire marshmallow in multiple layers of varying chocolate flavours for a real treat when anyone bites into their pop. Or (I know, I know, I am getting carried away) you could use mini marshmallows and make marshie kabobs. How fun :) 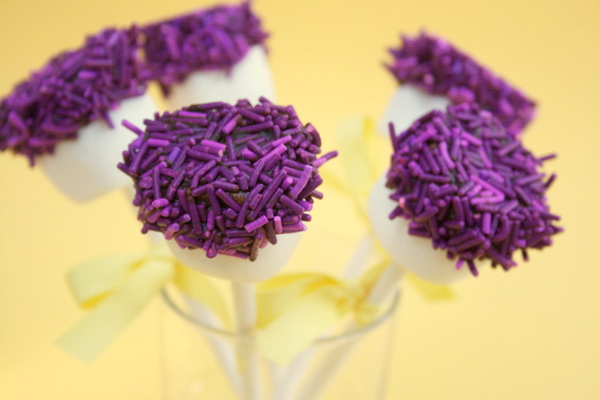 Happy Friday to you! Any fun plans for the weekend? xo